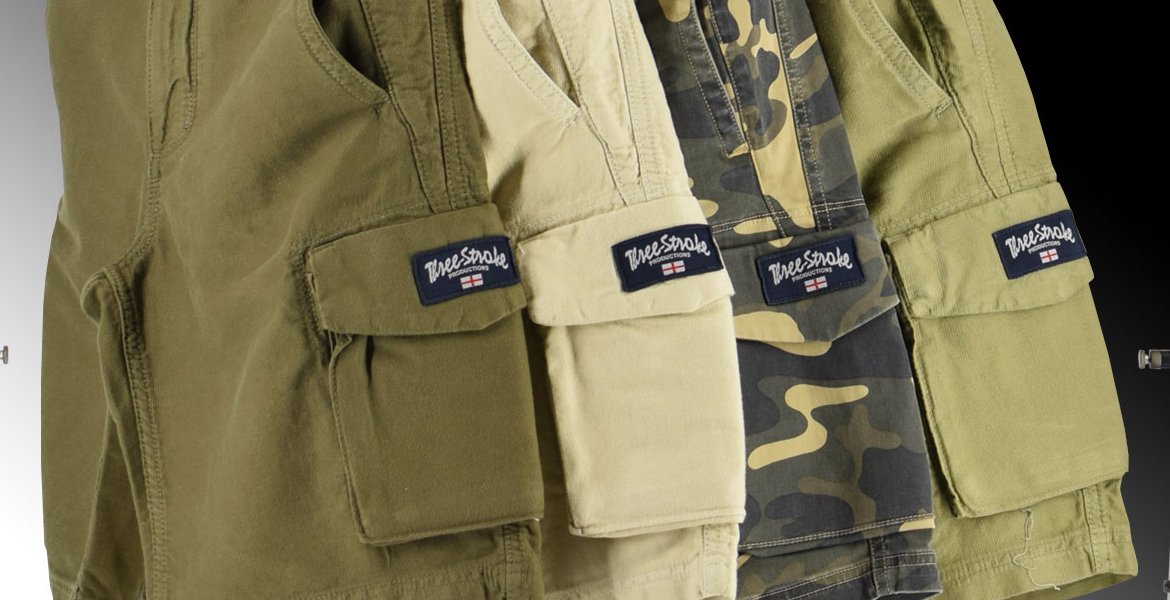 “Cargo shorts” by Three Stroke Productions are a real Summer must have.

With the warm season just around the corner, we decided to tell you something more about a piece of clothing that you will include in your outfits throughout the summer and that we offer in a variety of 13 stunning colorways

From bomber jackets to peacoats, from desert boots to countless types of shirts and trousers. How many military designed garments have become true clothing icons?

In this short story we will tell you about how and when the cargo trousers (and shorts) were first introduced into clothing, plus some interesting news about our Three Stroke Productions “combat” cargo shorts.

Shorts (without side pockets) made their clothing debut at the end of the 19th century as “knee-length” shorts and were used as school uniforms or by the boy scouts. They were originally clothes for young boys, but they stopped wearing them once they completed their school years.

At the time, no adult would ever have worn shorts except occasionally in sports and only from around the 1920’s. In fact, shorts didn’t make their appearance on tennis courts until 1932.

The idea of taking advantage of the space provided by big bellowed pockets suitable for storing maps or even ammunition was introduced into the British military in the late thirties, and the cargo trousers thus became part of the battledress of which the cargo shorts represented the natural evolution for environments characterised by high temperatures such as those of the North African deserts.

In a short time, the American military also integrated the “cargo” into their equipment, and so the long and short versions were used during the Second World War, first in the aviation departments of paratroopers and subsequently by all other sectors of the army.

But where does the name “cargo” come from? The so-called “paratrooper pants” were conceived on the basis of a very simple concept: more space in the pockets equals more things that can be inserted and therefore carried.

A very useful thing for soldiers in action. An important feature required for any military piece of clothing is its functionality: the American military therefore exploited the potential of cargo pockets to their best. Enlarging them and positioning them in a more practical way than the British had done a few years earlier.

From that moment onwards, cargo pockets became an irreplaceable element in the equipment of the American military during all following conflicts and particularly in that of the Vietnam war. But once the war was over, the veterans returned home and continued to use their military clothing. The functionality of the side pockets proved to be highly appreciated in everyday life, and within a short space of time, second-hand shirts, jackets, and of course also cargo trousers and shorts were to be seen at military surplus shops.

From then on cargo shorts became more and more widespread until they entered the world of fashion in the late eighties.

In the mid-nineties they became a favorite in the hip-hop and skater scenes, only then to be quickly adopted by other street subcultures before becoming a must for most casual wear brands, including of course Three Stroke Productions.

The first “Combat” of Three Stroke Productions dates back to 2005 and was made in Portugal in a camouflage version. Since then and through tests and enhancements on fabrics and treatments we have developed what is now our current model which we continue to call “combat”. The main feature of our combat cargo shorts and which differentiates them from similar items on the market is the use of a fabric called moleskin. Moleskin is a cotton fabric that was traditionally made in Lancashire and became popular with factory workers and agricultural workers due to its comfort and durability.

The moleskin was then adopted by the lauded nobility for hunting jackets and shooting clothing.

In more recent times, moleskin was used to make military uniforms and, thanks to its versatility, this fabric was eventually adopted by the clothing industry.

The use of a fabric such as moleskin means that our cargo offers an immediate sensation of resistance and comfort. The appeal of our combats is furtherly enhanced by a wide range of colours: to a solid base of military-inspired variants, such as olive, sage, desert, and chocolate, to traditional colours such as dark blue, anthracite, and stone. We have added new shades to expand the selection and to meet the needs of those looking for brighter garments: hence the introduction of tobacco, avion, and above all mustard.

Not only are cargo shorts super comfortable to wear, but above all they allow free circulation of air, giving you a feeling of freshness even on a hot summer day. They are well made with a resistant material, which makes them useful even when it comes to the outdoors. You can combine your shorts with almost any summer outfit because they will look good not only with t-shirts and polo shirts, but also with shirts and overshirts.